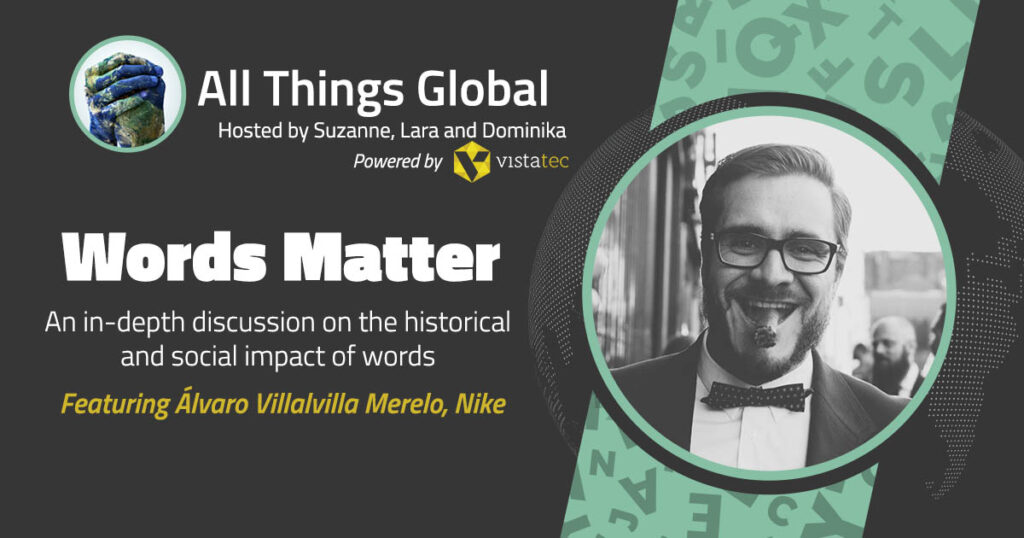 Vistatec recently hosted Episode Three of the All Things Global—Words Matter webcast with guest Alvaro Villalvilla Merelo, Senior Global Language Services Manager at Nike, and hosts Suzanne Frank, Lara Daly, and Dominika D’Agostino of Vistatec. Alvaro is a linguist by training and a “word nerd” by vocation. Alvaro has worked across localization, content operations, and brand marketing. In his work with Nike, Alvaro works with a globally distributed team to make all copies—regardless of language or cultural context—authentically and consistently on-brand.

Suzanne Frank begins the webcast by telling the audience they will hear about the historical and sociological impact of words from Alvaro. Alvaro talks about the fact that he is—and has always been—very passionate about words. He finds power in words and believes words have the power to change the world. He first asks those attending the webcast to hold a thought in their minds throughout his presentation—“If 2020 was a word, what would it be?”

Back to the power of words, Alvaro asks the audience to be alert to words like “extremism” and “terrorism,” discussing the fact that tyrants have used words against people for centuries. When words are not questioned, submission follows. Every generation has its own words; today’s youth have words like gender, race, and climate. These are three straightforward battles for the youth of America.

It’s important to remember that the words we use carry meaning and baggage. Whether we want it or not, our words are full of intent and intention. These words curry our ideas—even when they do so in a way we do not intend. We must unpack the historical baggage that accompanies our words by questioning the intent while asking ourselves how we can use words for change.

Alvaro notes that people use the pronoun “they” on a regular basis in the English language. This word does not assume who you are talking to. It is an inclusive word and has become mainstream over the past few years, allowing others to have a respectful exchange that makes no assumptions regarding gender. He admits that this is more difficult to do in the Spanish language because many words differentiate between males and females.

Some might wonder why such a seemingly small thing matters so much. It matters because words are “loaded,” and what do we tell our children? How do we help our children break free? We must become more conscious of the words we and others use, recognizing who uses them, who does not, and why.

Global warming is another example of how and why words matter so much. The term global warming is a very innocuous-sounding term. After all, who doesn’t want to be warm and cozy? The term conveys no sense of urgency, leading many people to wonder why they should worry about it at all. On the flip side, the term “climate emergency” conveys a much different message. This term conveys a sense of urgency, a call to action.

All of this is to say that we should use words purposefully, and while it is easy to get lost in semantics, we need to have more respect for linguists and writers. Translation is the oldest profession in the world, literally allowing communication between people of many languages. Alvaro ends his discussion by reminding the audience of his original question: “If 2020 was
a word for you, what would it be, and why?”

Virginia Diaz, Vistatec answers the question first, stating that “recreation” is her favorite word. She notes that from the human perspective, everything changed in 2020 and almost overnight became different. She sees the word “recreation” as the power to recreate—to be alive and happy when we can despite these massive changes in the world around us.

Lara Daly states that her favorite word to encompass 2020 is “chaos,” and Pascale Tremblay, Gap agrees, telling a story about him and his daughter. As the two read poetry together one night, Pascale thought about how much noise there is in the world. Noise and chaos, including in the use of social media. As he read a poem called “Exclamation” to his daughter, they realized the poem was about stillness—finding a place of stillness in the world when all around is so busy and chaotic.

Tim Arata, Locale Solutions says his word for 2020 is “revelation” because for him, the year 2020 was a revelation in terms of all the things he had previously taken for granted, including democracy. A year of revelation. Patrick Nunes, Rotary, admits to being a “language geek.” While he cannot condense 2020 into a single word, he wants to share an observation that a negative word can be positive and vice-versa.

Alvaro rejoins the conversation, noting that his word for 2020 is “balance.” He believes he found a work-life balance he had not experienced before 2020. Alvaro admits to being “slightly hyperactive,” meaning he has to put both efforts and thought into the word “balance.”

Soren Eberhardt, Microsoft, gives thanks to Alvaro for an “insightful presentation,” noting he initially took the question about one word for 2020 as a “trick question.” After all, compressing a year like 2020 into a single word is like “tweeting a policy in 160 characters.” There’s a danger that we can use words to compress complexity in a not realistic manner. Sometimes it takes more than a word, more than a sentence, more than 160 characters. For example, think of the challenge “how to spot a fascist,” using a minimal number of words. Using too few words for complex matters can end up being downright dangerous.

A couple of things from a word perspective is the word “humanity.” Most of us have never looked at our fellow neighbors, colleagues, or society in the way we did in 2020. We saw so much suffering, seeing how others were doing, it resonated. During the darkest times, one survival tactic is the word “gratitude”—being grateful for what you have.

Work-life balance is another term to add to the conversation. 2020 turned that term into “work-life integration.” Most of us made significant changes in our work lives that, in turn, made substantial changes in our home lives. Many of us were on virtual Zoom meetings with children and pets in the background, delivering a level of humanity into the workplace.

Suzanne notes that the word “gratitude” is not so much a descriptor but more of a theme once you see suffering around you and become grateful for what you have—the things that keep you grounded and stable in your own life. She finds that 2020 was also a reality check of sorts, on many levels, saying we should be grateful for democracy when it works well, for our ecosystem when it’s in balance, for our relationships in our lives that keep us going.

Patience is another word for all those who used to have the house to themselves for hours on end, then suddenly found that everyone in the family was home, making it hard to carve out time for work and themselves. Manuela also likes the word patience, as well as “mindset, rebellious, metadata, limbo, and waiting.” Tim notes that some words and phrases can be unfortunate, such as “defund the police.”

Alvaro agrees that “defund the police” was a poor choice of words, elevated to the mainstream for all the wrong reasons, as it is self-defeating and goes to the gut. While the goal was better training for police, the term “defund the police” does not accomplish this in any way. He discusses how it is essential to find common ground to build communities, noting the difference between a community and a “tribe.” (A tribe is exclusive, while a community builds on what we share).