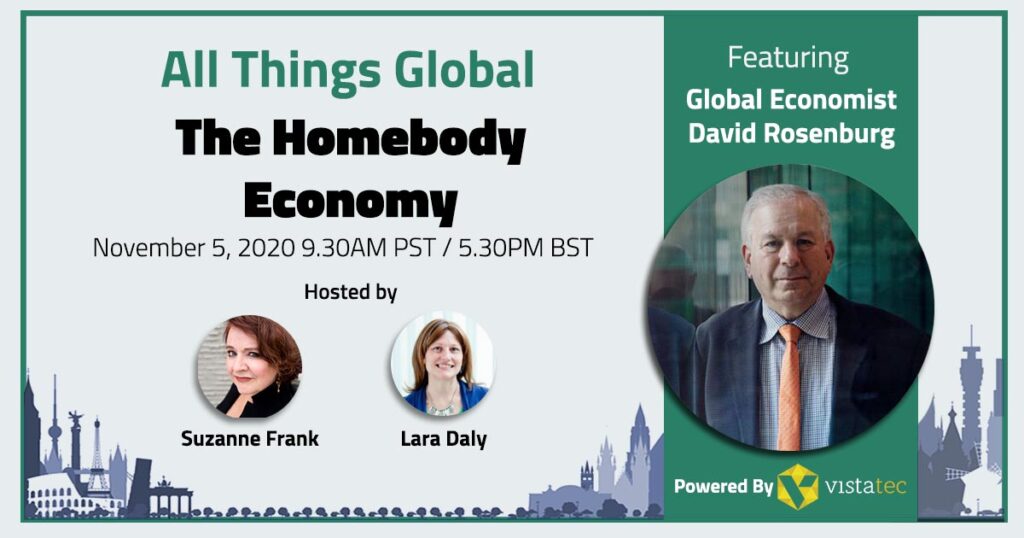 President and Chief Economist & Strategist at Rosenberg Research & Associates, David Rosenberg, joins hosts Suzanne Frank, Vice President of Global Enablement at Vistatec, and Laura Daly, Vice President of Expanding Global Community at Vistatec. Mr. Rosenberg is a frequent contributor to most major financial newspapers and publications in North America and makes regular television appearances in the financial media. This is Episode 2 of All Things Global, powered by Vistatec.

David Rosenberg is asked to describe his journey with economics. David answers that most people don’t know that he took economics as a junior in high school. On the first day of the class, David came home, and his father asked him how the course was. David told his dad that it was great and that they learned about the small open economy with no government.

His father looked at him incredulously and said, “Did you say ‘no government?’ Let me show you, something son.” he showed David his pay stub and said, “You see this $50 of my paycheck in the corner? Well, that’s going to the government. Maybe you should think of taking something a little more practical.”

David dropped economics in high school, and when he went to the University of Toronto, he went into the Bachelor of Commerce program to become an accountant. Halfway through his first year, David was doing well in everything except the one thing he needed to become an accountant—financial accounting. He had the worst grade in class when his professor told him that since he seemed to have problems balancing the books, he should go into economics!

In reality, economics is the study of behavior; you must know how to write and communicate. Since David’s favorite subject was history, he realized he could not be an effective economist without knowing history. David Rosenberg says he combined everything he loved, and economics became a passion. From that point, David’s career in economics took off.

David was asked to discuss how he came to coin the phrase “Homebody Economy.” David replies the phrase came about during the pandemic as he thought about how people were spending their time. David realized that he—along with hundreds of thousands of other Americans—had become a homebody in the sense that many of us began spending more time at home, forced to become more self-reliant.  A large portion of office workers have changed their homes into offices, creating more economic changes.

Although data sources such as retail sales numbers, consumer spending numbers, and the GDP are essential, David says it’s a real passion to see the trends beneath the trends or the story beneath the story. In an environment where we are seldom going out, there has been a redirection of spending. The silver lining of this pandemic is that many of us have learned to bake bread or sew our clothing. We are saving money at the laundromat because we aren’t going out as frequently, and auto sales have been reasonably robust because fewer people want to fly. There’s even been a boom in gardening (thus, garden supplies), just like after World War II when there were Victory Gardens.

Laura says she has noticed that cooking at home can save a tremendous amount of money. She wonders whether we may never go back entirely to the way we used to be because so many people have realized self-sufficiency is easier on the pocketbook. Because of this, Americans may never go back to the way we were before the pandemic a hundred percent. Of course, the flip side of that is that the airlines and service industries are hurting.

David Rosenberg says there was a 33 percent increase in GDP that became a big slogan for Republicans leading up to the election, and it came off a minus 31 percent in the second quarter during lockdown. Before the second quarter of lockdown, the first quarter was negative five percent, and consumer spending in the first quarter was negative six percent—as weak as anything we say in the great recession of 08-09. This was before the lockdown, as people were nervous about the pandemic and began pulling back on consumption even before the government officially declared a pandemic.

For example, since people can’t go to gyms, they are buying Peloton bikes—David says he didn’t even know what a Peloton bike was before the pandemic, and while he knew what Zoom was, he never used it. Now he uses Zoom everyday! The question is asked what these trends look like in global markets and whether David anticipates any trends in particular emerging markets or changes in emerging markets. David notes he is actually very bullish on Asia, particularly southeast Asia, including China, even though everyone is angry with China and would like to put them in some sort of penalty box.

Noting we live in a society that places a great value on liberty and freedom, David says that he will not comment on his views of U.S. society in general, but that Asia populations are more subservient, therefore more likely to listen and get the Covid vaccination, thus ending the lockdowns due to the virus. The irony here, of course, is that China was at the epicenter of the pandemic. He believes China will be very interesting from a geopolitical point of view, looking at the numbers, and that in the next ten years China will supplant the U.S. as the largest GDP on the planet.

Questions from the audience:

Sasha: Because many of us are stewards of brands can you give us some examples of the organizations that have navigated this effectively?

David Rosenberg: I touched on this in the beginning, but the world has changed in the past six months, so companies that can bring us a taste of our previous lives; some of the “tech titans” have done really well during the pandemic. Other brands that will do well include consumer staples, anything related to e-commerce, cloud services, and delivery services.

Pedro Gomez: I wanted to pick your brain on automation and artificial intelligence, where robots, machines and routines are close to becoming more intelligent and more productive than humans—what do you say about that at the macro level, and what does this mean for the economy overall and individual workers?

David Rosenberg: This is a trend that is really going to accelerate, particularly gaining momentum in auto manufacturing, services and retail services and medical care. A robot works 24/7, doesn’t take holidays, vacations, or lunch breaks, and doesn’t talk back to the boss. When people ask me whether robots will do what they do, I say probably, but they won’t have the same sense of humor while doing it. Part of this is due to the fact that as the baby boomers retire, we are seeing a rapid decline in the skilled labor force, so need to engage in AI and robot technology even more so than in the past.

Priscilla Noble: We are in the tech sector and doing well, but I’m looking at a question sort of larger in a global brand sense: we’ve heard about proudly local going global in that a lot of countries are seeing people that want to buy things made by people locally (not only in North America, but in other countries). Will products begin to be tailored more locally?

David Rosenberg: I think the natural outcome in a post-pandemic world will be reduced globalization. We began seeing this with trade wars over the past few years, but I think we will have more localized supply chains. In particular, semi-conductors, medical supplies and food securities will be areas where there will be more self-reliance by individual countries.

Pascale Tremblay: Insightful presentation; when we look at the homebody economy, what do you see short and long-term because our supply chains are global?